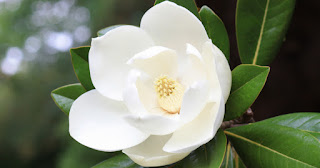 The plant genus Magnolia includes over 200 species of flowering plants that grow in Asia and the Americas. Magnolias have been around since the time of dinosaurs — before bees existed! — and are thus pollinated by beetles. In the American South, the trees are treasured for their fragrant blooms. But other aspects of magnolias appear to be even greater treasures.

“Magnolia officinalis and Magnolia obovata bark extracts have been used for thousands of years in Chinese and Japanese traditional medicines and are still widely employed as herbal preparations for their sedative, antioxidant, anti-inflammatory, antibiotic, and antispastic effects,” write A. Sarrica and colleagues in a review article. As the review points out, neolignans, and in particular magnolol and honokiol, are the main substances that explain the beneficial properties of the magnolia bark extract.1

Honokiol and magnolol were reported in 1975 to have a long-lasting muscle-relaxing effect in mice.2 This relaxing effect may be due to the compounds’ interaction with receptors for gamma aminobutyric acid (GABA), a key neurotransmitter.3 A randomized, placebo-controlled trial involving overweight, premenopausal women resulted in a reduction in mild transitory anxiety in those who received an extract of magnolia combined with the herb Phellodendron amurense.4

One of the most-promising areas of research involving honokiol is against cancer. “Investigations have demonstrated that honokiol possesses anticarcinogenic, anti-inflammatory, anti-oxidative, anti-angiogenic as well as inhibitory effect on malignant transformation of papillomas to carcinomas in vitro and in vivo animal models without any appreciable toxicity,” write R. Prasad and S. K. Katiyar in Advances in Experimental Medicine and Biology. The authors mention that honokiol affects multiple signaling pathways and that some of its molecular and cellular targets include nuclear factor-κB, STAT3, epidermal growth factor receptor, cell-survival-signaling pathways, the cell-division cycle, and cyclooxygenase. Additionally, its chemopreventive and therapeutic effects have been tested against chronic diseases, including various cancers.5